Choosing a Car for it's Infotainment System

More and more, car infotainment systems will affect our choice of which car we buy. And car manufacturers aren't ready to compete in that space. 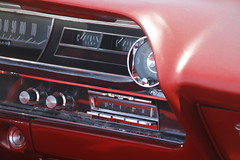 It's true that I like Fords, but that's not why I ask for them when renting. I'm more concerned about a consistent user experience in the car's infotainment system.

I have a 2010 F-150 that has been a great truck. I wrote about the truck and it's use as a big iPhone accessory when I first got it. The truck is equipped with Microsoft Sync and I use it a lot.

I don't know if Sync is the best in-car infotainment system or not. First I've not extensively tried others. Second, car company's haven't figured out that they're really software companies, so they don't regularly update them. I've reflashed the firmware in my truck a few times, but I never saw any significant new features.

Even so, when faced with a rental car, I'd rather get something that I know how to use. Sync is familiar, so I prefer to rent cars that have it. I get a consistent, known user experience that allows me to get more out of the vehicle.

What does this portend for the future? Will we become more committed to the car's infotainment system than we are to the brand itself? Ford is apparently ditching Sync for something else. Others use Apple's system. At CES this past January there were a bunch of them. I'm certain there's a big battle opening up here and we're not likely to see resolution anytime soon.